Art for Social Change: Viscosity and The Right to Exist 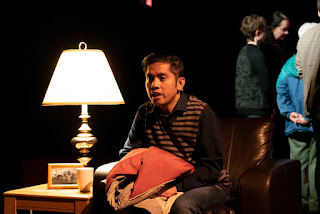 In this past month, I attended two events that remarkably utilized art to deliver messages for social change. The first was Theatre Yes' "Viscosity", which ran from November 7-17, and "The Right to Exist: An Evening of Arts and Culture", presented by Migrante Alberta and Climate Justice Edmonton, last December 8.

Viscosity was a uniquely staged production in the manner of performance and installation, tackling real life stories of people working in the front line of the oil industry. It featured a powerhouse cast - Chris Bullough, Leo Campus Aldunez, Murray Farnell, Byron Martin, Sandy Paddick, Melissa Thingelstad, and our very own, Filipino Jimmy Buena. This performance thrust people to engage in one-on-one encounters with the actors, absorbing the highs and lows of their respective experiences. The vignettes were culled from transcripts of interviews and delivered verbatim. The most heartrending of which was the story of a Filipino worker entangled in the ploys of an illegal recruiter. Jimmy Buena delivered a compelling portrayal, and I saw several in the audience in tears. 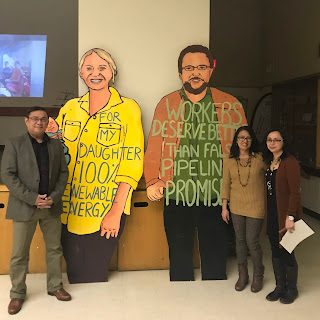 The production garnered rave reviews: ... unlike anything we've seen on Edmonton's stages before (Jenna Marynowski, After the House Lights); ... I invoke no hyperbole at all when I say it was one of the most engaging and enjoyable artistic experiences of my life (Dylan Howard, film director). We may know and have heard of experiences like these in the oil industry, but this staging just brought things to the heart. The transcripts of the interviews made for Viscosity will be provided to the Alberta Labour History Institute. Theatre Yes is a company dedicated to "responding to local, national and international conversations in thought-provoking ways". To know more about their work, go to theatre-yes.ca.

The Right to Exist: An Evening of Arts and Culture, was held in commemoration of International Human Rights Day and International Migrants' Day. It brought together activists, supporters, and artists across the Treaty 6 territory. It was a night of music, spoken word, visual arts, and thought provoking 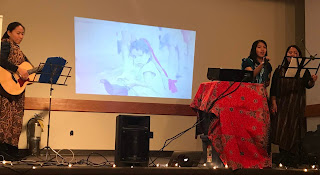 messages. The blessing was given by Elder Eli Green. Different cultures were represented in the performances provided by: drumming by Carol Powser and Chubby Cheeks (Noah), 8 year-old with a powerful voice; dry humour from comedian Mav Adecer; soulful and passionate singing by Chilean Marianela Adasme, Jesse Cunningham, Lyla Luciano, and trio Gregie Flores, Gina May Ramirez and Gemalil Bonaobra; spoken words by Shima Robinson and Brandon Wint. The performances addressed issues of displacement, racism, advocacy, and healing. Whitney Haynes shared her insights from a trip to the Philippines where indigenous tribes were violently displaced and abused, in favour of Canadian mining business. Visual artist Yazmin Juarez exhibited works of exploring the imagination and of art as the balance and catalyst for social awareness, specially made for the event. 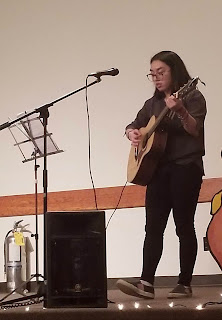 Art breaks down language barriers. Even when performed in a foreign tongue, the passion and spirit of the delivery still sends the message across. Interestingly enough, the issues that had roots from one culture resonates in various levels with another culture, setting and time. This demonstrates that these are universal issues, that events have a ripple effect across humanity, and that people don't live in silos.

Both events made me ache and naively wonder how these things can happen in our world. It made me grateful that there are people who go beyond their comfort zones and continue to push these issues into our awareness. All of us, in whatever capacity, i.e. artists, activists advocates, can be galvanized into action and heed John F. Kennedy's words "One person can make a difference, and everyone should try".