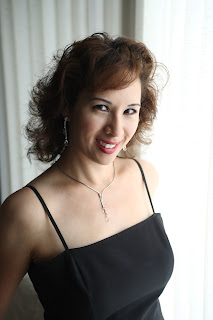 Maura Sharkey-Pryma is an established lyric coloratura mezzo soprano based in Edmonton.  The first time I heard her sing in a church concert, I was in awe with her vocal prowess and equally proud upon learning that she was also of Filipino heritage, tracing her maternal roots to Lipa, Batangas.
So when we were organizing the Philippine Arts Festival in 2010, we knew that it was essential to have her as one of the featured artists.  That production served as her “debut” to the Filipino community and events, and a shining example of the Filipino artist excelling in the global stage.
The span of Maura’s professional operatic career includes appearances with the  Vancouver Opera Touring Ensemble, Edmonton Opera, Manitoba Opera, The Opera Project, Opera NUOVO, Edmonton Symphony Orchestra, the Edmonton Chamber Orchestra, Edmonton Composers’ Society and a collaboration with Juno award winner Malcolm Forsythe and the University of Alberta Orchestra in Elgar’s The Music Makers.  Described by a critic as “an exuberant Canadian mezzo soprano... shows herself comfortable in all the registers, bursting precision and engraves resonance”, she has essayed roles like Cinderella in La Cenerentola, Mercedes in Carmen, Dorabella in Cosi Fan Tutte, and the Mother in Amahl and the Night Visitors.

As a young girl, Maura initially wanted to go into musical theatre but a penchant for classical music and a flute-like voice quality opened up opportunities for her in opera.  A holder of a Bachelor’s and Master’s degree in Music at the University of Alberta, she is one of those people who was constantly at the right place, at the right time - with offers and opportunities smoothly tossed her way.  This does not imply, however, that she never worked for or deserved those opportunities.  Lucky as she was, she impressed me as a very hard and determined worker, fully grounded and recognizant of her true place in her art.  As attestation, she has won the Western Canadian Metropolitan Opera Council Auditions in Vancouver in 1998; was a two-time awardee of the Johann Strauss Scholarship, and again, a two-time recipient of the Anne Burrows Foundation Scholarship.  She was also the Canadian representative in the Queen Elisabeth Music Competition in Brussels, Belgium in 2004. 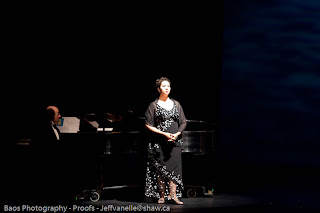 In addition to her personal achievements, Maura has generously been sharing her musical skills since high school, starting out as a piano teacher and eventually a voice teacher, coach and adjudicator.  “My purpose is to help each student build a solid musical foundation that will provide him/her a lifetime of enjoyment.  My job as a voice teacher and mentor is to inspire and uncover each student’s potential, and to be a guide-helping to develop and strengthen these gifts.  I am devoted to helping singers discover their voice, and present them in successful performances.”   From her private home studio and her studio at the MacEwan Alberta College Conservatory of Music in Edmonton, she trains ambitious young singers in classical, musical theatre, song interpretation, and extensive breathing and vocal techniques in the Bel Canto method.  She is also a proud member of the National Association of Teachers of Music (NATS), the Canadian Music Festival Adjudicators’ Association (CMFAA) and serves on the Board of Directors of the Alberta Music Education Foundation (AMEF). 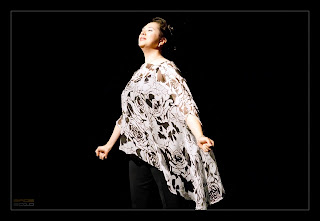 In an interview I had with Maura, she reminisced about her musical journey and how her mentors have ingrained their distinct characteristics on her; the balancing act between her love for music and her family; the excitement of learning new roles and materials; her anecdotes as a teacher; and her aspirations.  She shared her dreams of having her own music centre, of portraying the roles of Carmen, Suzuki in “Madame Butterfly” and more Rossini operas, and of doing some recordings, especially the Filipino songs.  She proved that she knows her stuff -- what she needs to work on, what she excels at, and acknowledges the realities of her industry.  Her advice to young singers is to find a good teacher & learn as much as they can, ensure always that the voice is technically sound before pursuing a career, persevere, and pay their dues.
Our conversation was relaxed, an exchange of thoughts between two artists.  As we talked about art and other mundane things, she presented herself as a regular human being, yet somehow provided the sense that one has chanced upon someone special - a person cut above the rest.  She spoke with passion and at the same time, with logic.  That she is blessed in talent, wisdom, generosity and humility is palpable, and she possesses this luminosity that I call the “aura of Maura”.  Witness her live in her next performance as the title role in Carmen with the Calgary Concert Opera Company in their 2012 season.