Behind the Scenes at the Edmonton Filipino Fiesta 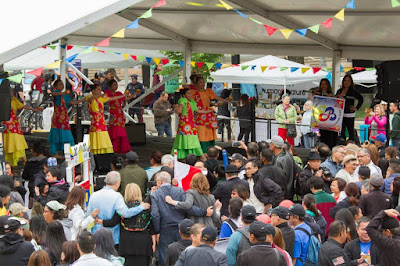 
The idea of an Edmonton Filipino Fiesta started with a question, in typical battle of Alberta fashion, “Why does Calgary have a fiesta when  Edmonton, the capital of Alberta, does not?” And so this group worked, step by step, learning as we went on the “City of Edmonton Events 101”. In each meeting we would talk about our vision, plans, and end the meeting feeling daunted with the tasks at hand. Having started the planning in March 2016 with a considerable tight timeline for a June event, we would end the evening agreeing to think over our plans and return with a decision on whether we would actually push through with the event or not. We would then assemble after a week or two, go through the same cycle of being caught up in the excitement and frenzy, until it was impossible to back out at all. In the most stressful times, we would ask each other, “Why are we doing this again?” This roller coaster ride for two years, however, was marked with humour, respect, determination and hard work. 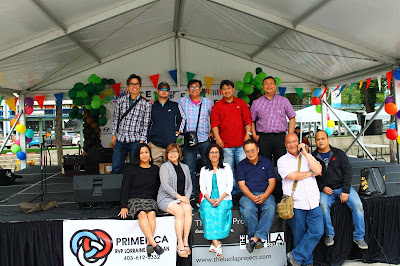 The vision for the Fiesta was a Filipino celebration that is inclusive, diverse in its offerings and demographics, and accessible. The Program (which I can personally talk about) was conceived as an avenue for both established and aspiring performers. The acts are unscreened, uncensored and non-hierarchical. Everyone is given a chance - as long as you’re Filipino, of Filipino-descent, or a non-Filipino but working on a Philippine medium or form of art. The goal is to bring the Filipino artists together - be aware and appreciate each other’s presence, talent and work, and hopefully, lead to further collaborations.
In the two years of the Fiesta, I’ve seen: artists go to international competitions and win; a singer performer during the first year of the Fiesta come back on the second year with a children’s choir he has established; a resurgence of younger performers; new performers on the first year returning with a more polished performance the succeeding year; artists meeting up during the planning stages and end up doing joint acts; and performance gigs being offered. And there are still more untapped Filipino talent. The Open Mic section alone saw additional Filipino talents that were not even on my radar. 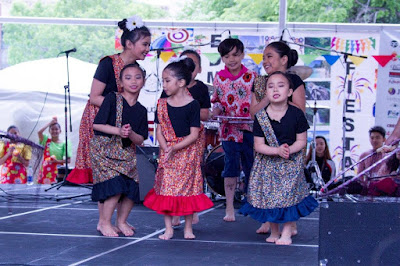 These attest that arts within the Filipino community is thriving, and needs to be nurtured and kept vibrant. And this is also my personal advocacy, and the reason why I enjoy working on this project - to be instrumental in bringing the Filipino artistic community together, in providing an avenue to showcase their artistry, and for some, provide some form of mentorship. These are also what artists and altruistic people realize when they volunteer their time and work. That through these efforts in building a community, the intangible benefits reaped outweigh any, or the lack of, monetary compensation.
And this is why, despite offers to bring in pop artists from the Philippines, it was a conscious decision that, even if we had the financial resources to cover the cost of importing pop artists, that we would concentrate and invest the resources to local artists and develop on the grassroots level. There was a defining moment this year, with one of the performers who was in both years’ Fiesta. We were backstage and she was looking around at the performers and the crowd. Then she says to me, “I can now see what you are trying to do.” What she saw were the enthusiasm of emerging artists, a growing circle of Filipino performers, and the development of an audience for them. Yes, it definitely feels good when someone gets it. 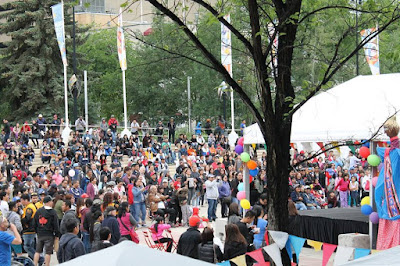 However, whatever headway the organizers have achieved in the past years, the state of future Fiestas is tentative. First off is the logistical question of where it will be held, what with the LRT construction downtown next year. But more importantly, is the subject of sustaining the human and financial resources required in the organization of the Fiesta. Because the reality of it is that the organizers are all volunteers and life sometimes imposes itself and takes over. And contrary to what others may think, the Fiesta does not earn money for the organizers. These are just my personal thoughts, and not representative of the organizers as a whole. And so with this in mind, this is in a way, a paean to my fellow organizers, who simply loved to have a good party, rolled with a good idea and met the challenges head on and with composure. So here's a toast to a job well done and hopefully, to a less nerve wracking future Fiesta!