The Phoenix Rises in Dale Urnos 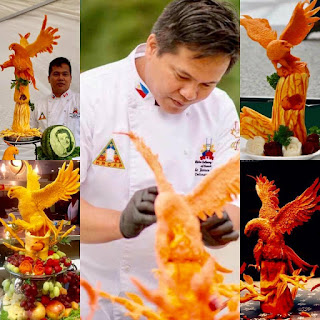 I love stories of personal talent and achievement. But add to that a story of survival and overcoming struggles, I am overwhelmed. Such is the story of Dale James Urnos, chef, and most importantly, a fruit and vegetable carver, in Edmonton.

Married to wife Geraldine and blessed with 3 children, Dale has been a chef for 12 years. His early working years though did not foretell a career in the culinary industry. His career pathway was directed by the money trail. Dale was studying electrical engineering but had to quit due to financial reasons. As a then working student, he was the caregiver and financial provider for his father’s dialysis treatment until his death. He worked in construction, at fast food outlets for McDonald’s and Domino’s and as a jeepney driver. Later he ventured to look for employment in Dubai, and worked in a restaurant, which started his journey as chef. Rising through the kitchen hierarchy, this later lead to contracts as a chef to the Bermuda Islands in 2007 and finally, in an effort to bring his family together, to Canada in 2010. 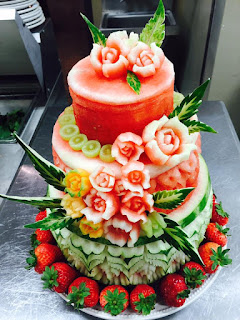 In all of these, Dale had always the challenge of overcoming the obstacle of a lack of formal education and certification for his jobs. He compensated through hands-on training, personal research and development, perseverance and the humility to work in lesser than ideal situations in order to be able to prove himself and eventually work himself up the ranks.

Good things happen to good people. Despite all his hardships, there are pockets of good fortune and memorable moments in his life which cement the belief that a higher hand is at play with his life. These circumstances would include: being in the right place at the right time for higher employment; training the children of Michael Douglas and Catherine Zeta-Jones the art of pizza-making; a co-worker surprising him by paying for his airfare to the Philippines; and an employer delaying downsizing business until he and his family received their permanent residency. 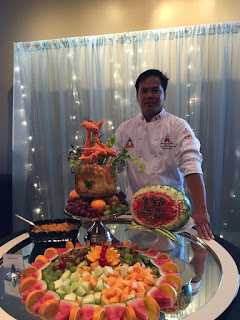 In the same pattern as most of the pivotal moments in his life happened by chance, his venture in fruit and vegetable carving was born out of a sense of isolation. Arriving in Canada in the height of winter, unprepared for the cold, and alone, Dale hunkered down and whiled away his time carving fruits and vegetables. Recalling how a previous Thai co-worker would do his centrepieces and watching Youtube tutorial videos, his single carrot roses garnered so much attention from co-workers, customers and friends, that these became regular table centre pieces and gradually grew in magnitude and complexity. Due to word of mouth and Facebook posts, he receives requests for personalized centrepieces and giveaways for special occasions, i.e. a wedding cake made of fruit for a bride unable to eat cake. All of these he does gratis and views as his way of paying forward. He donates his works to fundraisers and silent auctions. Check out his Facebook page to see just how amazing his creations are. He constantly pushes himself by working on different designs and experimenting with different mediums. When he is produce shopping, he not only thinks of flavors and recipes but shapes and textures, and potential art creation. His favorite symbol is the eagle which is obviously a symbol for his soaring dreams. 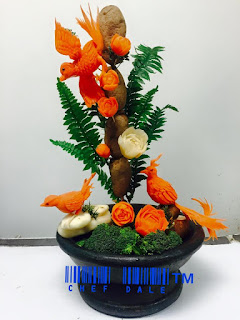 Dale now works as Head Chef at the Pineridge Golf Resort. He is part of the Canadian Culinary Federation of Chefs and Cooks (CCFCC), and is one of the board members of the Philippine Culinary Federation of Canada (PCFC). The PCFC is an association of Filipino chefs geared towards establishing camaraderie amongst Filipino chefs, assisting in fundraisers and providing hands-on training, mentoring, workshops and uniforms for aspiring chefs, and providing scholarships in the Philippines. This advocacy stems from the intention of making the path easier for aspiring chefs and sharing the lessons from his hardships - try and try until you succeed; practice until you master it; the true test of the chef is the love and passion for cooking; there is always room for improvement and never be afraid to take new challenges; always take a step forward but keep your feet on the ground; learn to accept advice and ideas from fellow chefs and even critics because you cannot please everybody; and most of all, work hard in silence and let your success be your noise. 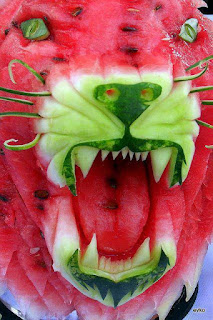 Dale’s life story, many aspects of which I have not even touched on, is as melodramatic as a soap opera. Life can indeed be stranger than fiction, as they say. However, it reflects a person who has a strong sense of responsibility and loyalty, perseverance, humility, and generosity. He is the kind of person who readily switched his own salary with another Filipino entry level co-worker to help him settle in Edmonton. It seems too good to be true. But skepticism aside, the world is a lot better with people like him. More importantly, this is a story of redemption, where “our passions are the true phoenixes; when the old one is burnt out, a new one rises from the ashes” (Johann Wolfgang Von Goethe).