With the planned revival of the hit musical Miss Saigon in the West End for 2013, and the consequent auditions held in Manila last November, the musical has caused once again quite a stir and renewed interest amongst Filipinos and artists.

Miss Saigon is a story based on Giacomo Puccini’s “Madame Butterfly”, inspired by a photo of a Vietnamese mother handing over her child to an American soldier who was about to board a plane for the United States.  It premiered in London in 1989 and has gone on to be one of the longest running musicals, performed in 25 countries, 246 cities and translated into 12 languages.

When the creators Cameron Mackintosh, Claude-Michel Schönberg and Alain Boublil were casting for the 1989 premiere, they noticed from auditions in London and in the US that there was a common denominator on the stand outs - Filipino blood.  They then decided to go to the source and found for themselves a mother lode of talents in Manila.  In Manila, they casted the lead roles of Kim (Lea Salonga, Monique Wilson) and Gigi (Isay Alvarez) and an ensemble of 13 actors who eventually performed some of the major characters.  Among them were: Victor Laurel, Robert Seña, Jon Jon Briones, Pinky Amador, Junix Inocian, Michael Williams. 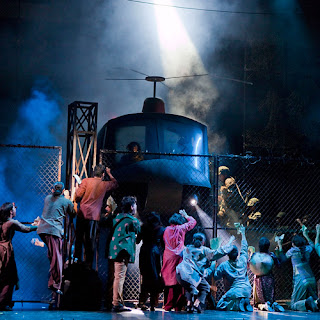 This huge contingent of Filipino artists to West End opened the doors for other Filipinos as well, who were cast in various stagings of the musical.  These included: for Kim, Jamie Rivera and Ima Castro; Leo Valdez, Raul Aranas as the Engineer; Joanna Ampil as Kim in London (1993) and Sydney (2001); Ma-anne Dionisio, a Filipino-Canadian raised in Winnipeg, who portrayed Kim in the 1993 and 2010 Toronto staging, and moved to play the same role in London, Sydney and Pittsburgh; Aura Deva as Kim, Robert Seña as Thuy, and Milanie Sumalinog as Gigi, in Stuttgart (1994); and Laurie Cadevida as Kim in Australia.

These landmark performances garnered awards for artists, most notable of which was Lea Salonga’s winning of the Best Actress in a Musical category for the Laurence Olivier Award (1989), Tony Award, Theatre World Award and Drama Desk Award (all in 1991).  Laurie Cadevida was also awarded the Helpmann Award for her portrayal of Kim in Australia in 2007.  And Aura Deva was named one of the most influential people in Germany. 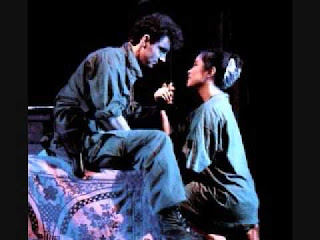 Manila holds a vital place in the Miss Saigon saga.  Aside from being a major source of cast members and the only Asian city where auditions were held by the artistic team, it was given the distinction to be the first city to stage the musical in its Asian tour, where it moved on to Vietnam, Singapore, Hong Kong and Korea.  Furthermore, the Manila run was the only Asian production that received immediate coverage from CNN.

Now 24 years after, the same team with additional key production members, has turned to Manila once again for auditions not only for the lead role, but for ensemble cast members as 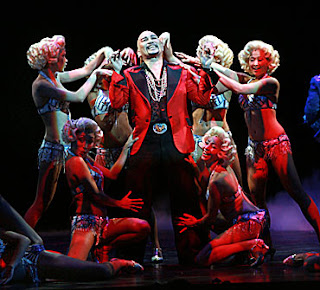 well.  It is also rumoured that American roles in the musical were open for casting too.  And although no casting news will be released as yet, the latest word is that six artists have made it to the final round of auditions - Rachelle Ann Go, Frencheska Farr, Mary Joy Solomon, Emerald Bañares, Apple Chiu, Tanya Manalang and Aicelle Santos.  Up for grab will be three possible Kims, with the two as understudies.

For sure, the people who will be part of this revival, will have their lives turned around in ways they would not have imagined.  As the original Kim, Lea Salonga, expressed recently in her Facebook page, “And so it begins again... It was in November 1988 that I auditioned for ‘Miss Saigon.’ Whose life is going to change this November 2012?” 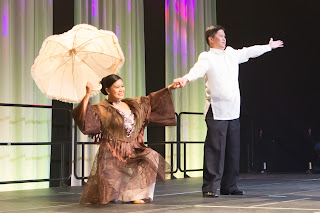 The 2nd Filipino-Canadian Gala was held last September 15, 2012 at the Northlands Expo Centre. Organized by Gala and Event Management lead by Lixmila Serrano and Ramon Cifra, the Gala is an annual event aimed at bringing together Filipinos and friends for a night of cultural feast and dancing, to celebrate the achievements of the Filipino community and at the same time, to support local charitable institutions. It had, as its beneficiary, iHuman, an organization that supports at-risk youth in Edmonton to rebuild their lives through the arts.  Last yearʼs beneficiary was the Edmonton Food Bank.


The Gala was held in a sumptuous hall that seats 800, in tables decked in red, white and blue, with the Philippine flag as the pattern for its layout. A tropical hut served as the dance floorʼs center piece, perfect for photo opportunities. Around the hall were booths of Filipino businesses and Gala sponsors, and display items for the silent auction. An added bonus for the night was the grand raffle prize of a free trip to the Philippines.


Guests were treated to song and dance performances prior to the official opening of the Gala, which was marked with messages from the three levels of government of Canada and the presence of the Philippine Ambassador to Canada, Leslie Gatan. Guests of honor were: Rona Ambrose, Minister of Public Works & Government Services, and Minister for Status of Women - Canada; Thomas Lukaszuk, Deputy Premier of Alberta; Stephen Mandel, Mayor of Edmonton; Naresh Bhardwaj, MLA; Richard Andersen, Northlands President; among others. In their speeches, they extolled on how the success of Filipinos all over the world serves as an inspiration and a reminder that much can be achieved through vision and guidance, and the Filipinosʼ reputation to be hardworking, generous and wonderful contributions to society, making Mayor Mandel exclaim We need more Filipinos to come to Edmonton! There are currently 330,000 Filipinos in Canada, 70% of which are Philippine-born. And to these people and their Canadian friends, Ambassador Gatan appealed for more Canadian investments in the Philippines, to keep both the cultural and economic ties, and declared that the Philippines is not the sick man of Asia anymore.

After a buffet of Philippine-inspired cuisine, guests were treated with performances by the Philippine Choral and HOJA. This performance of the Philippine Choral marked its transformation from a church choir to a show choir, with a full repertoire suite and choreography. HOJA, on the other hand, is an acapella trio who has performed all over Canada and recorded five cd albums. This followed with everyone dancing the night away, more photo opportunities and revelry. It was good to see the people of Edmonton come together in their evening finery to celebrate Filipino culture and achievements, and support a very deserving local charity. We look forward to the 3rd Filipino-Canadian Gala!

Photos courtesy of Kitakits Studio Inc. To view more photos of the event, go to http://

* This was written and published for the Pinoy Times, October 2012 issue.